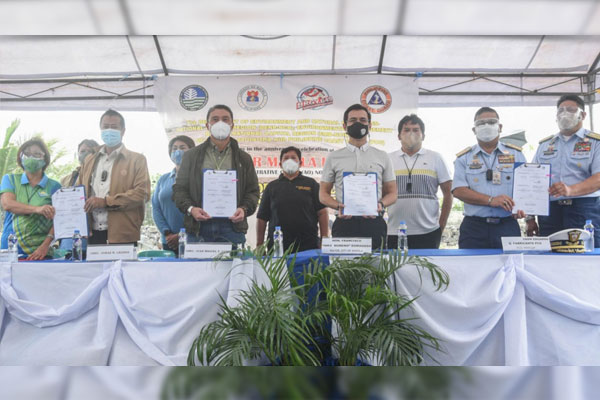 Manila City Mayor Francisco ‘Isko Moreno’ Domagoso announced that the local government has partnered with the Department of Environment and Natural Resources (DENR) for the installation of a water quality monitoring device in the Baseco beach area.

During a ceremony on Tuesday, February 9, Domagoso signed a memorandum agreement for the installation of a Water Quality Monitoring Equipment or WQME in line with the rehabilitation efforts at the Manila Bay.

According to the DENR, the device would be placed on a buoy for authorities to gather data, as well as detect and record levels of the following:

The installation of the device is only one among the plans of actions specified in the Writ of Mandamus issued by the Supreme Court (SC), which directs various government offices to rehabilitate Manila Bay.

"Today is a testament to our commitment to the rehabilitation of the Manila Bay. Both the national government and the local government stepped up the efforts to make this happen,” Domagoso said in his speech before officials of the city government and DENR.

“Now, we submit ourselves to this machine which can monitor if what we are doing is effective. Malalaman natin kung nagbunga ang ating ginagawa. Seryoso po ang gobyerno sa paglilinis ng Maynila,” he added.

Likewise, the Mayor thanked not only the DENR but also the Philippine Coast Guard (PCG) for their participation in the Manila Bay rehabilitation program, saying that unity among government offices and its constituents would render outstanding results in the program.

Cimatu, in a statement read by Usec. Leones during the event, stressed that the government “needs everybody’s help” in the rehabilitation of Manila Bay.

“Kayo po ang mga taga-rito and, thus, are in the best position to do round-the-clock monitoring of the WQME. Let us return Manila Bay to its former glory,” the DENR Secretary said.

He also revealed in his speech that WQMEs will soon also be installed along the other parts of the Manila Bay coastline—specifically Navotas and Parañaque.

The WQME installation is just one of the many projects of the Manila City government to clean and create more green spaces in the nation’s capital.