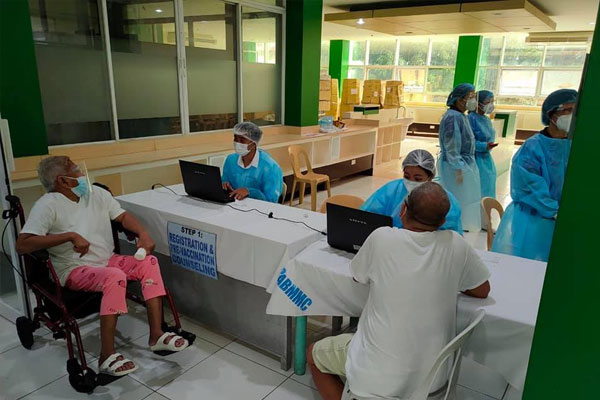 A total of 1,309 senior citizens, belonging to the A2 category of the World Health Organization (WHO) and the Department of Health, have already received their first doses of the AstraZeneca jabs in the city of Manila as of Sunday, according to a report by Philippine News Agency.

Mayor Francisco “Isko Moreno” Domagoso also announced during his live updates over Facebook on Sunday night that the city government is almost done vaccinating those in the A1.1 to A1.7 categories that include medical front-liners and other healthcare workers.

“Halos naubos na namin ang A1.1 down to A1.7, ‘yung mga sector na prayoridad ng Inter-Agency Task Force (IATF) at WHO ay halos na-comply na. Ngayon bumaba na tayo sa A2, mga senior citizen ng general population (We are almost done with the A1.1 down to A1.7, those sectors under the priority list of the IATF and the WHO are almost complied with. Now we are going down to the A2, the senior citizens of the general population),” he said.

He said there are individuals on the A1 priority list not vaccinated yet because they prefer other brands that are not available, some were infected with Covid-19, or simply do not want to receive the jabs.

The city government cannot wait for them, Domagoso said, that is why they decided to start vaccinating senior citizens.

The Covid-19 vaccination rollout continues in 12 sites on Monday:

The Manila Health Department reminded individuals who have preregistered via www.manilacovid19vaccine.com to present their printed waiver form or show their QR codes for faster verification.

Walk-in individuals who wish to receive the Covid-19 vaccine are also welcome.

“Kung hindi naman kayo nagpa-register at nabalitaan nyo pwede kayong pumunta (If you have not registered yet and you heard about the vaccination), you can walk in,” Domagoso said.

For senior citizens, Domagoso said that the city is administering the Covid-19 AstraZeneca vaccine that is recommended for them.

He said when more Sinovac supplies arrive, the city will next inoculate the A3 list, or those aged 18 to 59 years old with comorbidities.

The reimposition of enhanced community quarantine in the National Capital Region Plus bubble also made Manila impose innovations to be able to accommodate senior citizens, who are not allowed to go out.

“We evolved. We had door-to-door, house-to-house and street vaccination because we do not want to violate the rules and at the same time, we want to achieve our goal,” he said.

Other vaccination sites are covered courts.